The certificate of the customs representative of FCS of Russia No. 0875/00
RUS ENG
16:49
CUSTOMS CLEARANCE
AND DELIVERY OF GOODS

Russians will be able to choose which COVID-19 vaccine to vaccinate. In addition to domestic vaccines, imported vaccines will be available. This was announced by the deputy director for scientific work of the Central Research Institute of Epidemiology of Rospotrebnadzor, Corresponding Member of the Russian Academy of Sciences Alexander Gorelov. The import rules will not be the same, some of the drugs can be imported into Russia using a relatively simple scheme. At the same time, our vaccines will be and are even already being exported abroad. 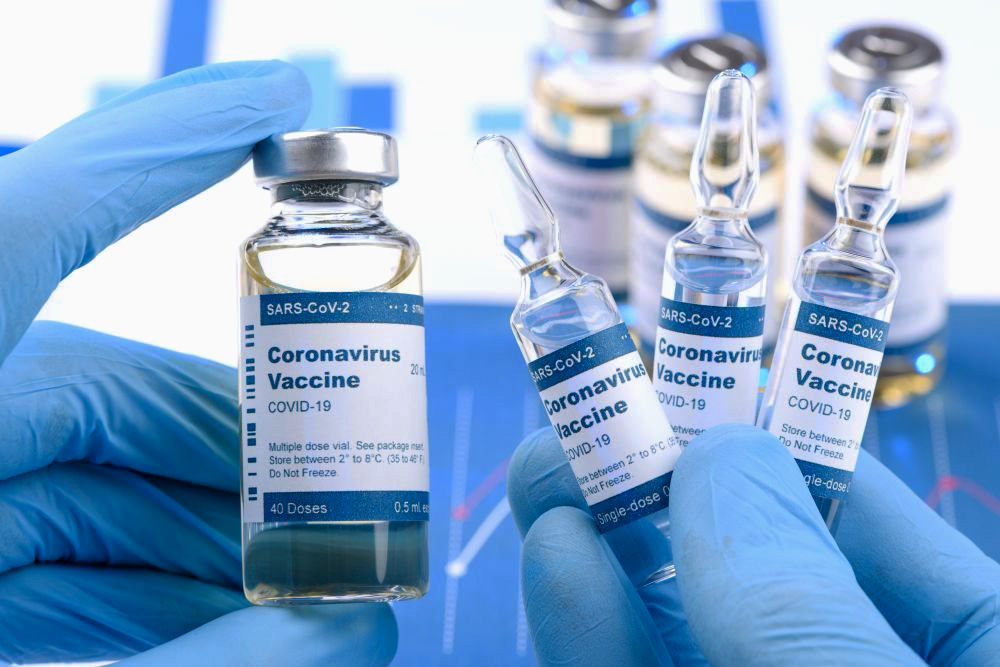 
The global need for a coronavirus vaccine is 4-5 billion doses. There are 47 covid vaccines at different stages in the world. About a quarter of them are already in clinical trials at the final stage. These are vaccines with different mechanisms of action. In the future, it is planned, after identifying the indications and contraindications for each of the drugs, to use them for vaccination of people of different age groups, including people suffering from certain chronic diseases: if one vaccine is not suitable, then another will be used. As experts emphasize, the formation of immunity in various groups of the population occurs with peculiarities. For example, children and the elderly should not be vaccinated with the same drug.

There are four vaccine options: 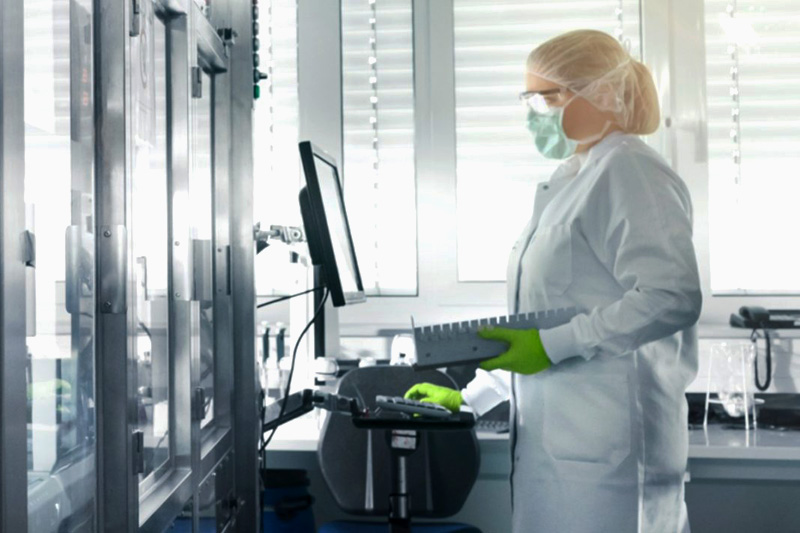 The RF Ministry of Health approved four vaccines for clinical trials, one of which was created in China. If the tests are completed successfully, then the Chinese vaccine will be produced at domestic factories.

At the end of the research, they receive a license, but this is not the final stage, after that the researchers will observe the vaccinated people, in order, to establish finally the effectiveness and safety of the drug.

The world's first coronavirus vaccine was registered in Russia on August 11, 2020 and was named “Sputnik V”. This vaccine is injected intramuscularly and is characterized by high antibodies to the original Chinese virus coronavirus and the absence of complications. It refers to vaccines with a viral vector. The human adenovirus acts as a vector in it. The drug was developed by the N. F. Gamaleya National Research Center and in the future will be produced by Binopharm, R-Pharm, Generium. The release is organized in two forms: frozen and dried. The logistics of the dried form of the drug is simplified. More than 20 countries have already shown interest in the “Sputnik V” vaccine.

“Sputnik V” is involved in clinical research. At the moment, "phase 3" is being carried out according to the WHO methodology. Re-vaccination of volunteers will be completed by the end of January 2021. A "conditional marketing authorization" has already been received and will be renewed after the completion of the third phase of testing. The tests themselves will end in August 2021. Initially, it is planned to inoculate the most contact professional groups of people with this vaccine, in particular, doctors, journalists, as well as the elderly.

Interesting! Some people have already registered acquired immunity to the coronavirus, which is due to T-cells activated after "meeting" with other coronaviruses, not SARS-CoV-2. Older people react worse to the coronavirus because fewer T-white blood cells are produced with age. When the disease is severe, the T cells disappear.

The second vaccine of domestic production – "EpiVacCorona" is being developed at the Novosibirsk Center of Virology and Biotechnology "Vector". It was created on the basis of artificially synthesized proteins of the new coronavirus. The first phase, which consists of testing the vaccine on a small group of volunteers, has already passed. First of all, doctors, sellers, teachers, police officers, bank employees will be vaccinated with this vaccine.

In the same center, in addition to “EpiVacCorona”, five more vaccines are being developed, which are still at the stage of preclinical trials. One of them is a protein cocktail , the other four are vector. The St. Petersburg Research Institute of Vaccines and Serums is developing a vaccine that uses plasmids based on the viral genome. A similar development is underway at the Lomonosov Moscow State University.

The third vaccine of the Russian Federation is being developed at the M. P. Chumakov Research Center, but it has not yet been registered. This drug is a traditional inactivated whole-varion vaccine that uses inactivated viral particles. It is easier to create and modify. This type of vaccine produces a strong immune response. However, due to the fact that the virus reproduction mechanism is chemically inactivated, there is no 100% guarantee of safety. 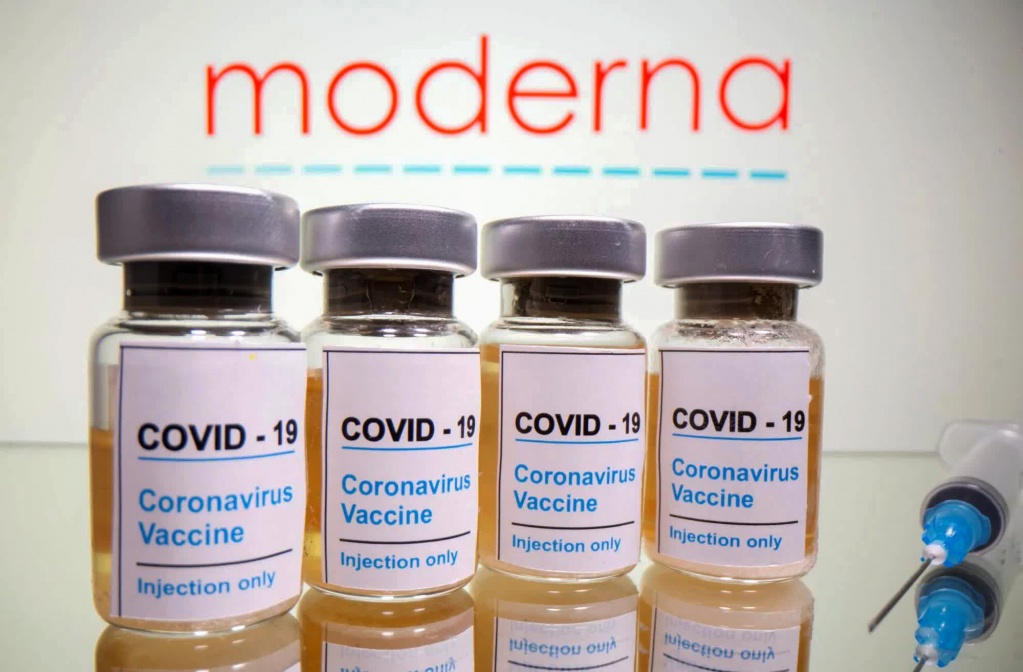 Of the imported vaccines, several drugs should be noted:

Pfizer / BioNTech is already in production. By the end of 2021, it is planned to release about 1.8 billion doses, which will allow to vaccinate about 1 billion people. Government orders for this vaccine came from Great Britain, the European Union, and the United States. 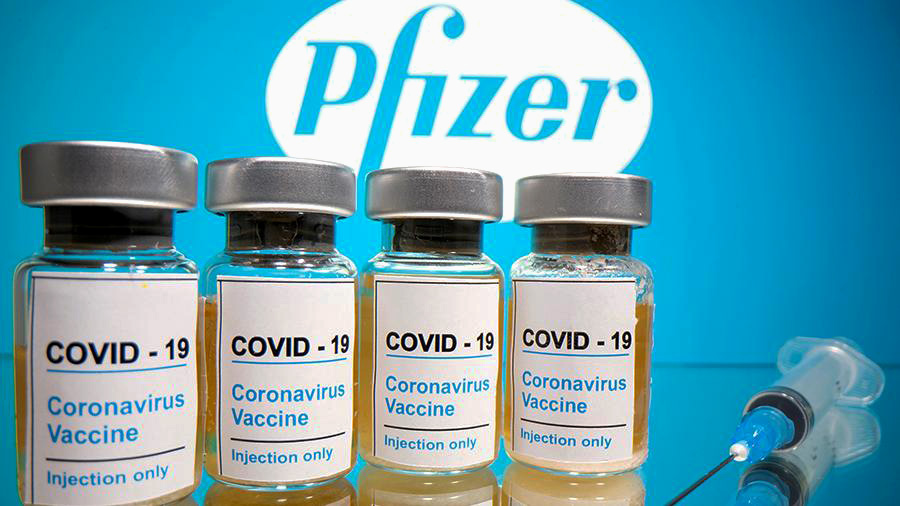 In addition to these, there are several more vaccines, but which are still in the earlier stages of testing:

Customs clearance of export and import of coronavirus vaccine

Pharmaceutical factories and private wholesale companies have the right to export vaccines, i.e. move bulk shipments. For export, you need a license from the Ministry of Economic Development of the Russian Federation. Export customs duties and tax are not paid.

To export the coronavirus vaccine, the following documents are needed:

Interstate transportation of medicines by individuals is possible only for personal use. Moreover, in some cases, the customs may require a prescription.

Important! Not all foreign-made drugs will be available in Russia immediately after the completion of clinical trials. First, you will have to go through a complex registration procedure, including the examination of the Ministry of Health. And this means the need to conduct clinical trials in Russia or Russia's participation in international research. However, this requirement can be circumvented by using Order No. 441, according to which an exception from the mandatory examination rule is allowed for medicines registered in the United States, the European Union, Canada or other countries. In this case, registration under the emergency protocol will take about 5 days.

Conditions for storage and transportation of the COVID-19 vaccine 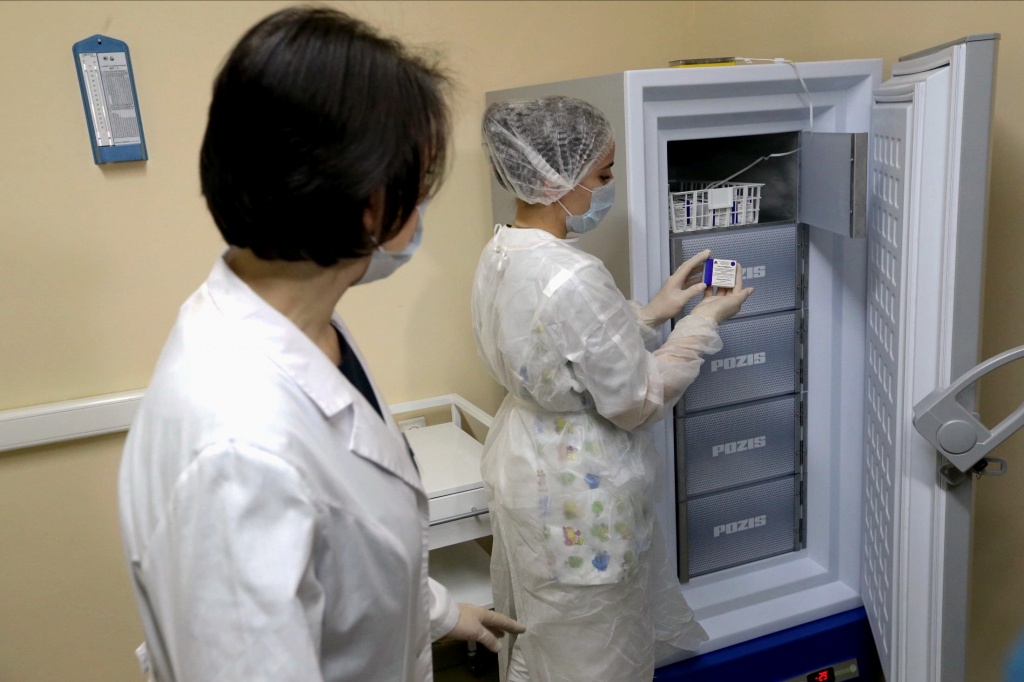 The shelf life of vaccines from coronavirus of different production is different:

This means that vaccination sites must be equipped with special refrigeration technicians to store the vaccine. Moreover, due to the particularly difficult storage conditions and the limited shelf life of the drug from the United States, Pfizer / Biotech have developed special containers, each of which can hold from 1,000 to 5,000 vaccines. According to the company, the transportation period will not exceed three days.

On December 7, 2020, the logistics passport for the supply of the frozen “Sputnik V” coronavirus vaccine throughout Russia was approved, which entered into force the day after its publication. It will be valid until March 1, 2021. This document regulates the conditions for storage and transportation of the vaccine at all stages of movement from the manufacturer to the consumer.

“The cold chain” includes several stages:
The main requirements for the equipment used for the transportation and storage of the vaccine: 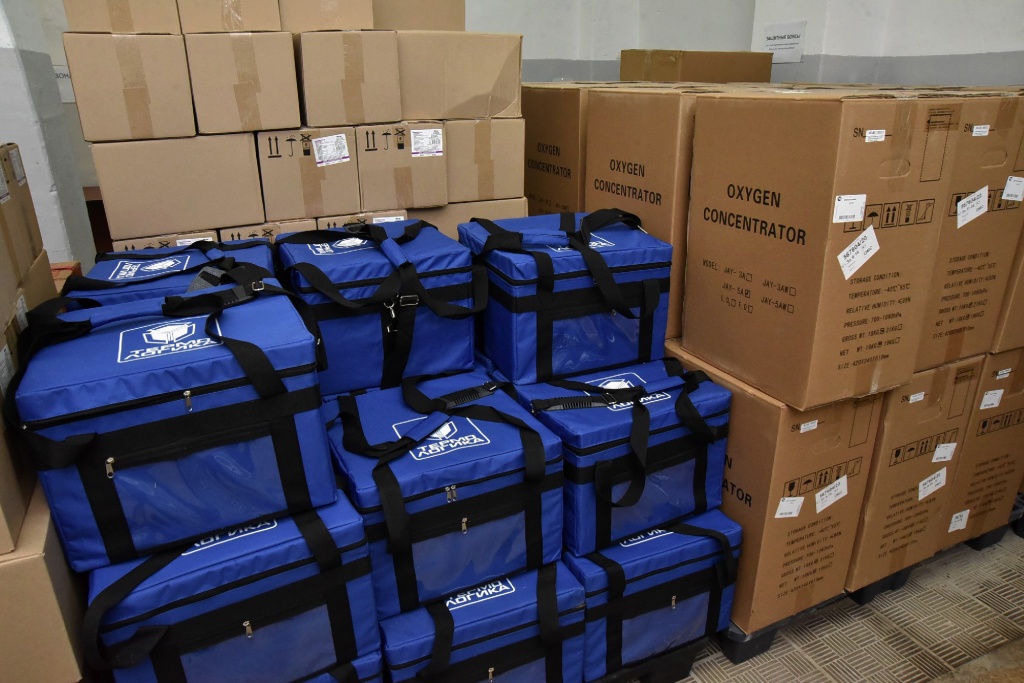 The vaccine is loaded into thermal containers in a freezer at the proper temperature, and the containers themselves must be pre-cooled.

Transportation of thermal containers is carried out in the back of a refrigerated truck, in which the temperature is maintained below -20 ° C. A thermometer and a thermostat must be installed inside. The permissible measurement error is no more than +/- 0.5 ° C. Moreover, information about the temperature regime is visually displayed on the screen in the driver's cab. The body of the refrigerated truck must also be cooled before loading. Vaccine containers are secured to prevent damage.

When working with containers containing dry ice, the following safety precautions must be observed:

Note! Drivers and forwarders must be instructed on the necessary actions in case of an accident, equipment breakdown, disinfection measures. 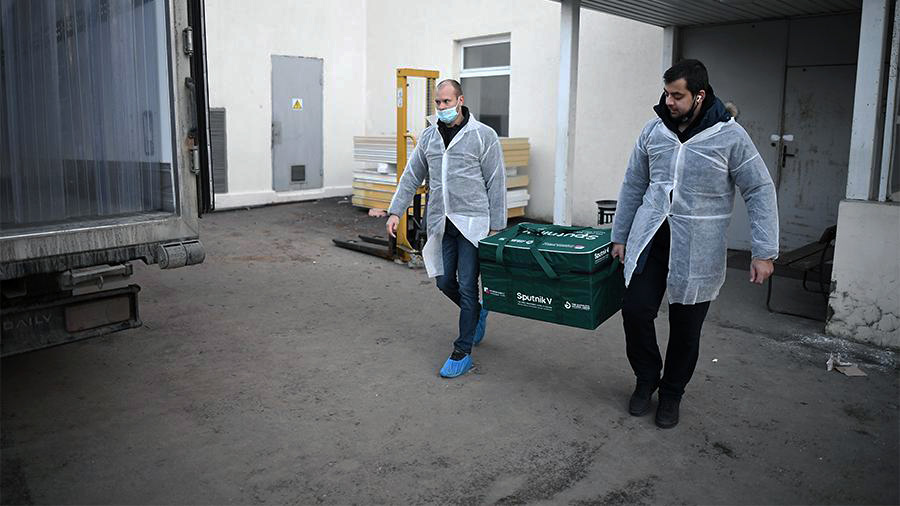 Registration of the receipt and dispatch of the vaccine is carried out in a special journal, which indicates the name of the manufacturer, the address of production, the number of doses of the drug, the supplier, the indications of the thermorecording equipment with identification numbers, the full name of the employee performing the registration. Acceptance documents are accompanied by the readings of the temperature recorder for the entire period of transportation in paper or electronic form.

The SB Cargo company will help to carry out the transportation and customs clearance of vaccines of domestic and foreign production, both in import and export directions. For more information, please use the contact details provided on the website.